Allow me to introduce Syd Rabbit. 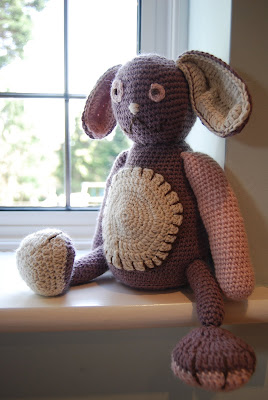 He is the first crochet project that I have completed that required me to learn how to read the pattern and find the confidence to tweak it when it didn't seem to be going right. 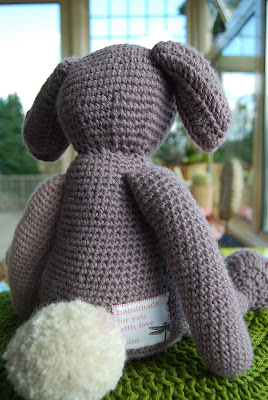 I'm not sure if I did it right in the end, but who cares? I'm very pleased with him...and I am struggling to wrap him up to give away. 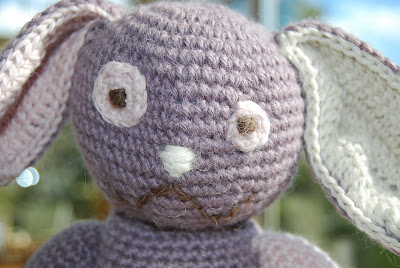 I keep wondering if his face is a bit scary. His eyes are meant to be different sizes, by the way. 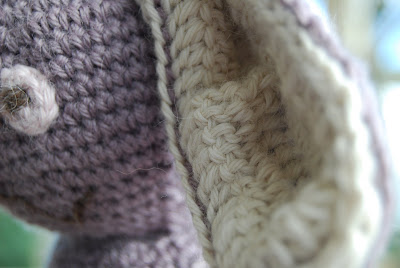 Likewise, so are his ears. 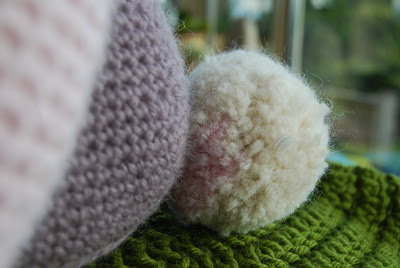 I've not made a pom-pom for probably 30 years! It took a huge amount of wool! 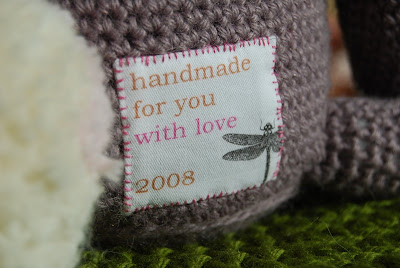 It is also the first time I have made some labels like the ones in this book. I bought some printable cotton from here, and made them on my PC. The cotton comes as an A4 sheet backed with paper that goes through my printer as usual. Then you peel the paper off and give the cotton a quick wash (I just used washing-up liquid in some warm water) and then leave it to dry. Cut the labels out and voila! On one A4 sheet I got 6 small labels and 4 bigger labels - perfect for personalising my quilt. 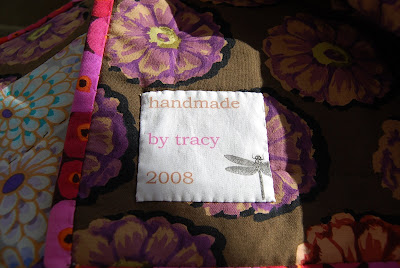 The pattern for Syd came from this book. It has some wonderful projects in it, including a cushion that I am in the middle of making, with some adjustments of my own. I think though, that I may have to make a Syd for myself as I have got very attached to him. I used Rowan Classic Baby Alpaca DK.

He will be delivered to his new owner on Sunday. Her name is Anna and she is the newly arrived daughter of a very special couple who I have met through my bereaved parents group at Helen House.

Helen House was the hospice that Tom was involved with. I say involved with because I am struggling to find the right word. I had not been that keen to get involved with a hospice because the very word sounded so awful, but a friend of mine managed to convince me it would be worth looking into, even if it was to be just for some respite care. After some soul-searching, I decided to go and have a look. My preconceptions evaporated as soon as I stepped through the door. It was such a warm, friendly place and the staff there were caring and mindful of my apprehension. I was given a tour of the building and was hugely impressed. There were facilities for No2 and I to stay in the building while Tom was being looked after, so that I could have a break and be taken care of too.

Being a charitable organisation, there were no waiting lists, funding applications or referral processes to go through and so I agreed that we would give it a go, purely for respite. They offer an end-of-life service, but I knew I would not be taking them up on that. I discussed it with No2 and he seemed very keen to go there - the hydrotherapy pool is a surefire hit with most children! One of the first things that he asked me after Tom had passed away was if that it meant that we wouldn't be able to go to the hospice.

As it happens, we never made it there. Time ran out for us. But in the months following Tom's passing, I had letter from the Bereavement Team and was invited to join a group of bereaved parents from Helen House for a series of workshops. To say I was nervous is possibly understatement of the year, but I took a deep breath and drove back to Oxford. That first workshop was called 'Do Men and Women Grieve Differently'. Hmmm, I was there on my own, so I guess the answer to that is Yes... I actually found it extremely difficult to witness other people's grief, particularly the fathers who were there.

The workshop was facilitated by the chaplain - a lovely man by the name of Mark. He made me feel very comfortable despite the circumstances and on the back of that first workshop I joined a group of parents who committed to meet 6 times over the next 8 months.

Our series of meetings has now come to an end but the bond we formed was so strong, we have decided to carry on meeting up and so, on Sunday we will come together again to draw support from each other by simply sharing the fact that the worst has happened to us all. We will welcome Anna into our group as a blessing. One of the things that we have all agreed on is that because we all lost sons, it has given the group a stronger bond for some reason.

Tomorrow I am going to the Annual Service of Remembrance at Great Ormond Street hospital. I shall be remembering my beautiful boy and the other boys from my group. I shall light a candle and shed some tears. It is uncanny that each year this service will fall on the weekend before Tom's anniversary, as though it was arranged just for us. Of course, it wasn't, it is just a coincidence...