And top of my list is R & R.  I need it after the whirlwind of the last 3 weeks.

The last week has been a blur and conversations have been full of acronyms.  My Dad finally had his CABG last Thursday, as planned, albeit a little later in the day than expected.  We visited him in ICU where it was quite a shock to see him ventilated and with so many wires and tubes going in and out of him.  By the following day, he was sitting out in a chair, sipping tea before being transferred to HDU.  He spent a couple of days in there having some CPAP as his lungs were still collapsed.  I took him on his first little walk along the corridor, laden with drip stands and oxygen cylinder on Saturday afternoon and then on Sunday he moved back to the ward. By Tuesday, he was home!  I think it is just starting to sink in what exactly has happened to him and the thought of having open-heart surgery is almost unbelievable to him.  Even with the scars so visible to remind him.

Being in the thick of such an intense hospital experience had a profound effect on me and stirred many, many memories of a time 13 years ago when I got my first taste of ICU.  I have spent the last couple of days chilling in the garden and trying to establish some normal routines again.

I can't leave a post without a photo and here's one (not a very good one, I know) of Dad's hospital bed one afternoon.  It raised more than a few eyebrows and several smiles... 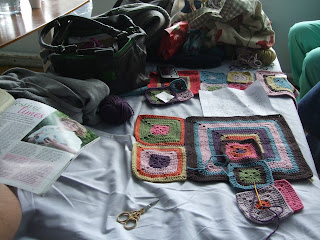 ...I'm not very good at doing nothing for hours on end, so took something along with me!
Posted by dragonfly at 06:50 13 comments:

Email ThisBlogThis!Share to TwitterShare to FacebookShare to Pinterest
Labels: family

Don't you just love it when...

... you find the perfect fabric for your current project? 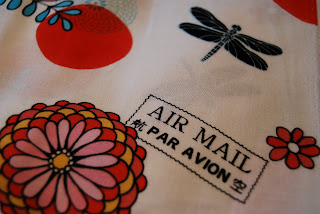 Email ThisBlogThis!Share to TwitterShare to FacebookShare to Pinterest
Labels: don't you just love it when..., fabric

Is it immature for me to use those little hearts?  Is it a bit girlie?!  Here's the reason... 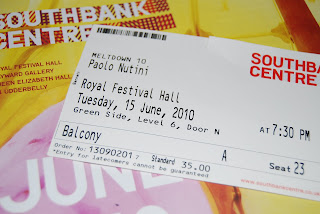 ...all part of Richard Thompson's Meltdown at the Southbank Centre... 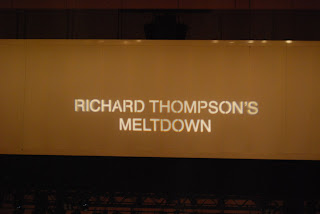 ...I'm a bit short on words, but he was just fabulous!  An amazing singer and it felt so intimate for some reason too.  But then I have posted about my teenage tendencies before! 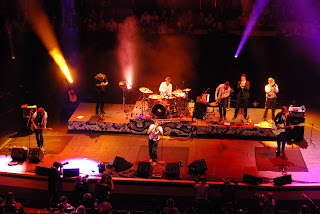 Email ThisBlogThis!Share to TwitterShare to FacebookShare to Pinterest
Labels: music

First things first!  I just wanted to say thank you to all of you who wished my Dad a speedy recovery after my last post.  It's been a painfully slow ten or so days but (fingers crossed) he will have his surgery on Thursday.  I have finally sussed out routes to and from the hospital using both public transport and my own car.  It seems that the London transport system grinds to a halt (particularly going East) at weekends in preparation for 2012.  Never mind, I can ogle all the yummy places as I drive through Islington and then down City Road and Old Street.
Anyhoo, back to purple. 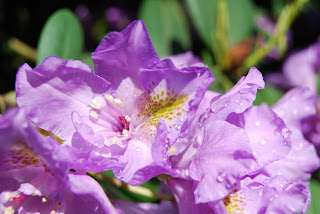 A couple of weeks ago, Kristina and I met up for our monthly visit to Kew Gardens.  I would say that the stars of May were the rhododendrons.  This mauve one was my favourite.  I just love the speckled throats of the flowers. 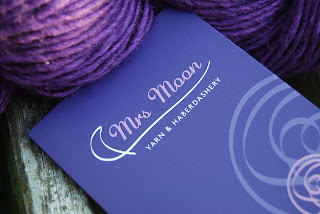 I had another wonderful day out with Kristina too.  This time we met up with Diana at Petersham Nurseries, which I know is one of these lovely ladies' favourite places and is fast becoming one of mine!  The disappointment was palpable when we discovered that the tea room was closed due to a fashion event.  Best hot-foot it over to Mrs Moon then!  THE most amazing yarn shop EVER! 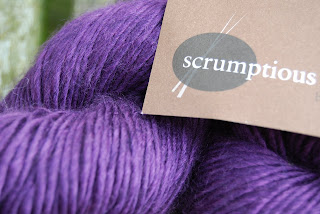 The girls that run it are brilliantly knowledgeable about all things yarn-y and it really did have the best selection I have ever seen - all the yarns that I drool over online, there for the stroking!  I couldn't resist this scrumptious purple yarn.  It is incredibly soft.  I'm going to make this with it. 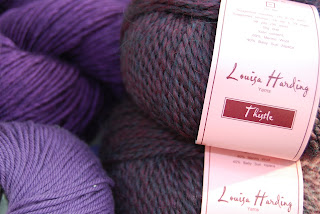 It seems that I was unable to resist the lure of purple that day and added some Louisa Harding and some Debbie Bliss cotton dk to my bag. 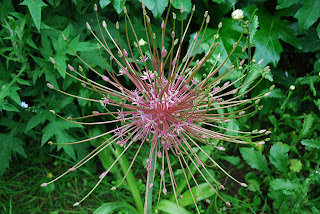 And keeping to the theme of today's post, my garden has produced this fabulously dramatic allium.  It is HUGE!  At least 12" across - like an explosion.  Love it!
Posted by dragonfly at 12:00 6 comments: 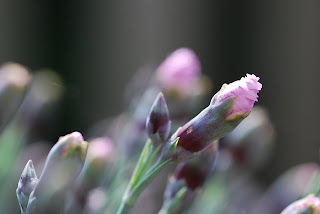 Just when you think things are ticking along.  You're minding your own business, keeping out of trouble... A curve ball comes along and tilts everything in its path. 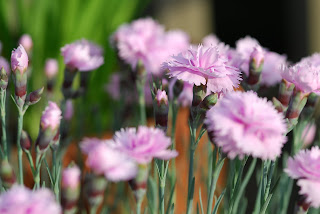 My curve ball came in the form of a frantic phone call last Friday from my Mum, saying she'd called an ambulance for my Dad.  I ran.  I drove.  I watched my Dad have a heart attack and was blue-lighted into hospital with him.  He has been waiting for bypass surgery for the last 5 months and it seemed just for a minute that it was too late.  He is still waiting (not very patiently, either, I might add) and after being transferred to another hospital, the last week has been frustratingly slow.  Because of the drugs he was given in the acute stages, it has been too risky to perform the surgery.  Fingers crossed, it will be early next week. 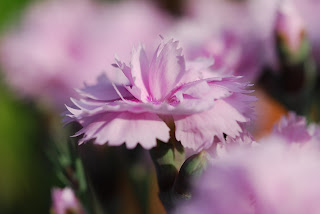 The hospital is in Bethnal Green over in East London and after getting to grips with how to actually get there, my days have been spent either keeping my Mum company or sitting by the phone waiting to hear any news.  Frustrating, to say the least. 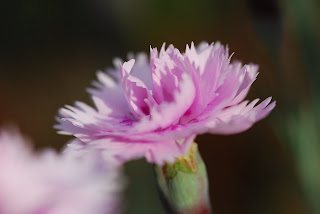 On a lighter note, every time I step outside my back door, I get the most amazing scent of these old-fashioned pinks.  I wish you could poke your nose in to the photos and get a whiff!  They remind me of my great-Nan, she had loads in her back garden.  It's funny how smells are so evocative...
Posted by dragonfly at 19:44 17 comments: 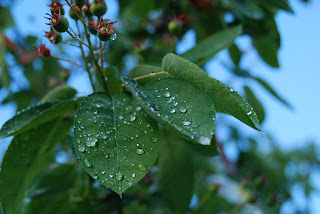 I was out early in the garden this morning, transfixed by the morning sun on the droplets of rain clinging to the plants from the miserable, wet day that was yesterday. 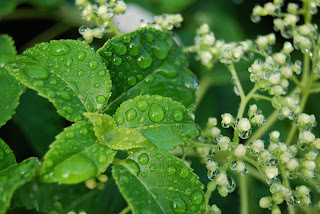 Interspersed with these droplets are some droplets of life here over the last week... ::  I have taken part in another training day at St Mary's with a new group of registrars.  Another wonderful group of people with lots of questions for me to think about and try and answer. 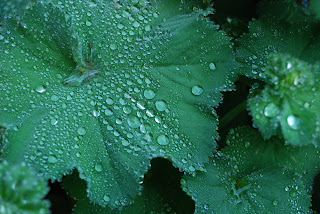 ::  I have now got two bereaved parents that I am working with from Helen House.  I feel satisfied that my months of training have actually come to something.  I have shared tears with them and felt privileged to have listened to their stories of their children. 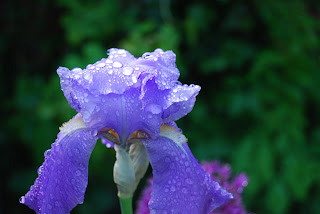 ::  I have celebrated a birthday with a wonderful lunch here. 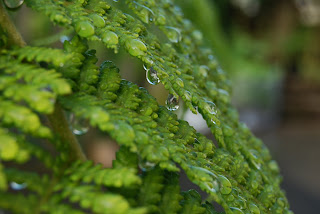 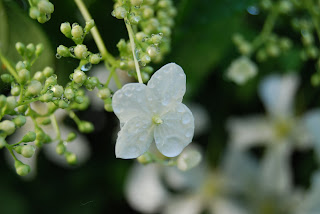 ::  I have a long, long list of things that are in my work pile, including a food mixer cover for another customer.  I will be winging that one as I've not made such a thing before but she has given me her ancient one to use as a pattern.  I have more blinds and curtains to make for my Mum, plus a couple of other bits and bobs that she has asked me to make for her new house. 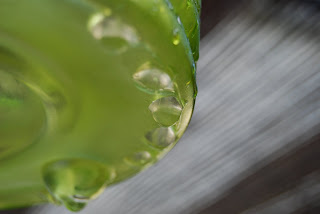 ::  I have bought some of this gorgeous, gorgeous fabric and I am going to attempt to make something for me to wear.
Posted by dragonfly at 08:42 12 comments: